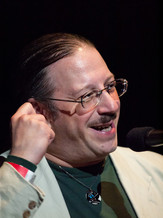 In 1982, Tony debuted on WCWP-FM with both his weekly oldies show and his unique 'Forward Into the Past' format. During these early radio shows, he played the major hits of the 60s and 70s, while introducing audiences in the New York area to some great lost songs and forgotten bands. Tony and fellow Beatles fan Kathy VanTassell co-created the nationally recognized radio show 'Beatletrax' in 1984.  By 1986 Tony was flying solo on the show (though the two co-hosts still occasionally reunite for anniversary shows), and in February of that year, Tony had the honor and distinction of presenting the first lengthy U.S. interview with original Beatles drummer Pete Best.  'Beatletrax', which ran through 1988, also gained notoriety because of Tony's tendency to play 'rare' takes, unique mixes, and seldom-heard cuts.

Tony is an archivist who has been collecting rare music and video footage for nearly thirty years.  By day, he is a Media Librarian and Multimedia Technician for a major public library.  During his 'off hours' he can be found lecturing at various Long Island libraries, universities and theaters. His Beatles-related lectures have covered topics as varied as the 1964 Australian tour, the final 1966 tour, the '500 Reels' (the nickname for the recently 'discovered' Nagra audio reels of 'Let It Be' sessions), and the John and Paul 'feud in song' of the early 70s.

Tony's foray into Internet-based radio began with the creation of his show '4F', short for 'Free Format For Free' in 2005.  The program first surfaced on the Live365 Internet network, but eventually landed at Podarama.com.  The show returned Tony back to WCWP-FM, where '4F' alternates weekly with the return of BeatleTrax. He is occasionally joined on his shows by the multi-talented Winifred Boyd (a.k.a. "Tony's 'better half"), fellow archivist Kimbal Brandner, or ... and this is when things get crazy ... by the co-hosts 'of Fab 4 Free 4 All' .  New programs ideas are also currently in development with the 'terrestrial' station.

The voices of every one of the Beatles, Stewie Grffith, Yogi Bear, George Burns, and dozens of unique original characters will often sneak out of Tony's mouth, and his creativity has led to some interesting voice-over work.  But it was his 'real' voice that served him well as lead vocalist for the 60s and 70s band Shindig! from 1994 to 2007.  From the late 80s through the late 90s it also took him to the stage as a member of one of New York's oldest community theater groups. Tony is an internationally performed playwright, and his original stage adaptations of Hans Christian Andersen childrens' stories led the theater organization to England, Scotland and Wales in 1995.

Tony had the honor and privilege of working behind the scenes as one half of the 'dog and pony' show that he developed with legendary New York DJ and author Pete Fornatale to promote his books 'Back to the Garden: The Story of Woodstock' and 'Simon and Garfunkel's Bookends'. In 2011 he also produced the audiobook edition of Pete's S&G book. When Pete left us in 2012, Tony continued to host the programs, using the template he and Pete had developed.

As the narrator for 'The Simon and Garfunkel Songbook Performed by Aztec Two-Step', Tony has the pleasure of working with two incredible musicians/vocalists, songwriters and all-around great guys, Rex Fowler and Neal Shulman. He was introduced to the duo by their mutual friend Pete Fornatale. They continue to use portions of the script that Pete developed for earlier versions of the show based on his S&G book.

For many years Tony served on the Board of Directors of the Long Island Music Hall of Fame. He was the main scriptwriter for the group's 2006, 2008 and 2010 gala events, and assembled the video presentations that accompanied each induction. He also co-directed the live events in 2012 and 2014.

In 2013, Tony found himself behind the scenes once again as the producer of a series of events in the New York area billed as 'An Intimate Rehearsal with Art Garfunkel'. The program featured music, stories and an Q&A segment with the legendary singer.

Tony is thrilled to have joined forces with two dear old friends ... and fellow Beatles historians ...   Mitch Axelrod and Rob Leonard as a co-creator and co-host of 'Fab 4 Free 4 All'!

Tony Traguardo is now a "video jockey" on VoiceofPeace.com, and a disc jockey on The Voice of Peace Radio ... heard worldwide!

See the lead-in clip to my show below!